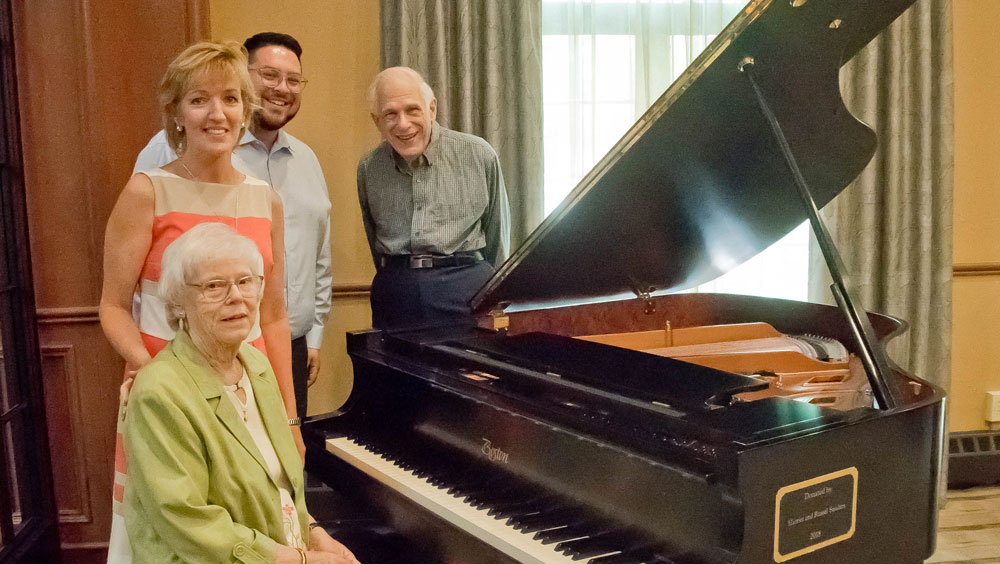 A ‘Grand’ Gift for The Normandy Senior Living

A truly ‘grand’ gift was dedicated at The Normandy Senior Living’s Breakwater Apartments on July 18 as residents and staff gathered to commemorate a new Steinway Piano at the Rocky River Senior Living facility.

The magnificent piano – a Boston by Steinway – is the most generous gift of Normandy residents Harriet and Russell Sanders.

The idea for the new piano was the upshot of discussions with a friend at the Normandy, Fedora, about a replacement for the beige baby grand piano that served the Normandy for years.

(Shown in the above picture: Harriet and Russell Sanders with Kelly Coury, Administrator, and Cameron Orlean, Owner, The Normandy Senior Living.)

The idea was pursued by the Sanders, and research began for something beyond compare to grace the newly remodelled Avalon Hall within The Normandy Senior Living’s Breakwater Apartments.

Their search took them to the Steinway Piano Gallery of Hudson. There, they learned that Steinway is the top name in concert pianos and the Boston model is the one most favored by students of Baldwin-Wallace University and The Cleveland Institute of Music.

The piano arrived at The Normandy five days later. “The piano was not completely tuned when it arrived, but it sure did sound amazing,” said Kelly Coury, Administrator at The Normandy Senior Living.

Two weeks later the piano was tuned to perfection by the person who recommended the Steinway Piano Gallery to the Sanders. 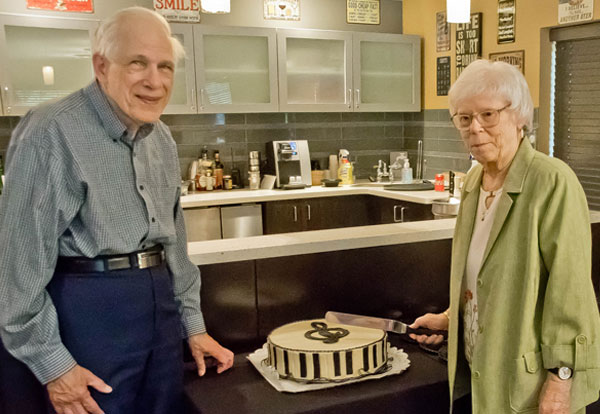 Russell and Harriet Sanders celebrate the piano dedication with a special cake.

“Shortly after, Fedora wanted her friend, Mary Ann Blunk, to come here and perform for everyone to hear what the new Boston Piano sounded like,” said Kelly. “The night of Mary Ann’s performance was one to remember. We had a full house and then some in the Avalon Hall. All who attended the performance really loved what they heard, so we had to book something else very soon.”

The next event came the following week when Gary Ryan, well-known area keyboard and piano artist, played to another full house with 75 guests filling the Avalon Room.

Gary also played at the dedication ceremony, coaxing elegant melodies and chordal harmonies from the distinctive instrument. “It is just a pleasure to play this piano,” said Gary after the performance. “It is unlike anything else.”

The filled Avalon Hall resounded with applause as Gary concluded his performance. The emotions of the day from the capacity Avalon Hall audience of Normandy residents were echoed by the words of owner Cameron Orlean, who addressed the Sanders personally from the dias:

“Nothing sounds like home more than music, and this is your home,” said Cameron. “We thank you sincerely. Through the years, whenever this piano is played, everyone will think of you and the generosity of this gift. Thank you.”