ROCKY RIVER, Ohio — The Breakwater Apartments at The Normandy on Lake Road in Rocky River introduced their new look to the public on May 20.

By Linda Gandee/special to cleveland.com

The $7 million renovation of the 146-unit building is part of a larger project that will also add the Lakeside Assisted Living facility — about 80 units — scheduled to open in July.

Both projects are elements of what will make The Normandy a complete, 30-acre campus for three-level senior care: independent living, assisted living and skilled nursing with rehabilitation services, plus a dedicated memory care center.

About 300 people visited during the May open house, most from the Rocky River, Westlake and Fairview areas, but some from as far away as Akron.

(Shown in the above picture: The Breakwater in Rocky River shines with new, extensive renovations.)

A tour of the building shows just how much thought and care went into the renovations, which were done in the public areas. Renovations in the apartments are done each time they become vacant.

A large cafe off the lobby was the beginning of our tour. It is open from 8 a.m. to 4 p.m. and offers a free continental breakfast, as well as lunch until 4 p.m., with a daily special. The cafe is very spacious, but informal. There is a $150 monthly allowance for food included in a resident’s package.

The Normandy has a chef and all food is prepared fresh on the premises, seven days a week. The kitchen is also used for cooking and art classes.

The large, formal dining room now has an added drop ceiling for a feeling of more intimacy, and the room also has a working fireplace.

A multi-purpose community room for residents or area organizations features a free private dining room for up to 16 people. The cozy Thurber Library, with bookshelves and a lot of books, was dedicated in honor of one of the residents.

Hallways are wide, light and bright, with large windows looking out onto the grounds.

The pub completes the first-floor tour. It is a friendly room with a bar and plenty of room, with tables for friends and family to meet and relax. There is a cocktail hour twice a week, drink specials every night and a menu of typical bar food, such as chicken wings.

A model apartment proved to be extra roomy, even at only about 800 square feet. Others go as high as about 1,300 square feet. Even the foyer is extra wide, to accommodate wheelchairs, and considerations include slide-out bins in the cupboards and a more accessible height for the counters.

Add in other amenities — such as a myriad of activities including exercise classes, a salon for hair and nail care, a ping pong table, a putting green and landscaped gardens with walking paths, plus transportation for trips such as doctor appointments, local events and shopping — and one realizes that a well-rounded, complete living experience can be had at the Breakwater.

One remarkable resident spoke about her experience after living at Breakwater for almost a year. Carolyn Szep, 96 years young, was originally from Strongsville. She said she chose the Breakwater because of references from other residents and one last, living relative nearby.

Her favorite part of living here, she said, is all the activities. Just one story about her life reflected someone who has always been, and still is, an active person.

She used to own a florist shop in Cleveland. She closed the business after she was robbed. “Two men came in just before closing time,” she said, “and locked me in the cooler.”

It took her three hours to smash anything she could find on the door. “And I prayed,” she said. She finally broke through the door and escaped.

One week later, she closed and sold the shop. Afterward, she traveled as a consultant for FTD until she was 90 years old which is when she formally retired. 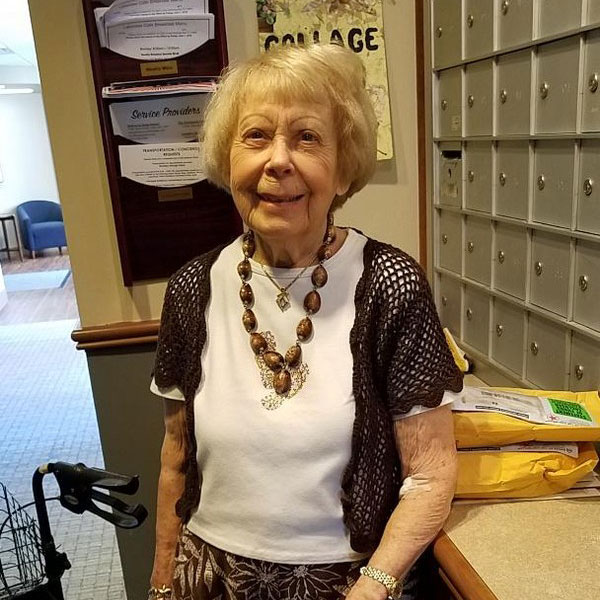 Carolyn Szep, a resident at the Breakwater in Rocky River, stopped to chat.

When a visitor commented on her interesting life, Szep said there are many more interesting people in the building.

There used to be an early TV program called The Naked City. Each episode concluded with a narrator speaking the iconic line: “There are eight million stories in the naked city. This has been one of them.”

At the Breakwater Apartments, in addition to being a lovely place to live, it seems a good bet there may be almost as many interesting people.